In the beginning, photography was seen as precise and mechanical, handmade images were seen as more spiritual, Snyder thinks that this may have been more of a reaction to industrialization in general than from any threat perceived by artists. Snyder in his essay describes two distinct styles of landscape photography that emerged between 1850 and 1870 in the midwest of America. These were based on two different viewpoints, that of the businessmen who wanted to make the territory more appealing to settlers which Snyder termed “Invitational” Photography (Snyder, 2002, p189) which Snyder claims is demonstrated in the work of Carlton E. Watkins (1829 – 1916). The counterpoint to this was Snyder dubbed “Contra-Invitational” was demonstrated in the works of Tim O’Sullivan, which showed the landscape as a bleak and more hostile place that was less inviting to prospective settlers.

I have chosen to contrast two pictures, one Yosemite Valley, from the Mariposa trail (1865/66) by Carlton E. Watkins with an image titled “Quarters of men in Fort Sedgwick, known as Fort Hell” (1865) by Tim O’Sullivan.

Yosemite Valley, from the Mariposa trail (1865/66) by Carlton E. Watkins

Image found on the website the Photographs of Carlton Watkins

This first image by Carleton Watkins shows a beautiful Valley looking into Yosemite Valley, it depicts a lush green and pleasant land with plenty of water exemplified by the presence of Bridal Fall on the right third of the picture. This image conforms to all the conventions of classic Landscape Photography which, the work of Watkins had a big hand in defining. It is tempting to liken it to the work of Ansel Adams but in truth, it is the other way around as Watkins was one of the inspirations for Adams work. The overt purpose of this picture was as a geological survey but as the article connected to this picture points out it is far more than that, Watkins must have gone to great lengths to compose this image and achieve something inviting and pleasing which would inevitably encourage people to visit. In this scene the foreground is dominated by the large round boulders, he as created a beautiful recession with distinct layers as we move into the image along the valley, captured in the distance are the famous icons of the Half Dome and El Capitan, all placed expertly in the frame giving credence to the idea of very careful composition. Snyder claims that Watkins created these images without realising he was conforming to the rules of Landscape painting and that his fans either did not see this or did not want to, preferring to subscribe to the mechanical view of photography.

Quarters of Men In Fort Sedgwick, Known as Fort Hell (1865) by Tim O’Sullivan 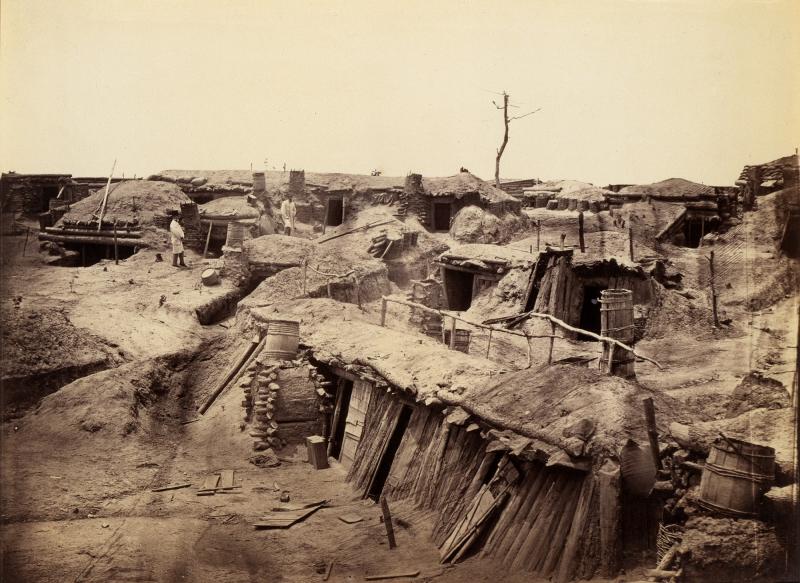 As can be seen from this image O’Sullivan depicts a more hostile environment, this composition is of Fort Sedgwick which was known as Fort Hell, the image depicts some very rough living quarters and is surrounded by fortifications and staked fencing. The living conditions look hard and rough, it feels like a desert and there is not much evidence of water the only obvious vegetation is a tree which looks in a very sorry state further reinforcing the idea that this is a tough dry place to live built of logs mud and skins, the entire fort looks like a shanty town built from whatever could be found at the time. O’Sullivan’s work was conducted during the first expeditions made without military control and was done under the scientific premise of documenting and surveying, it was not fueled by the need to sell the garden of Eden ideal to the viewer. Oddly although O’Sullivan was done by a scientific brief the chiefs did not think the images would be good enough for the survey and so they took an army of draughtsmen as well. Osullavans images were used to illustrate the reports written about the territory.

By contrast, this image would not likely encourage people to visit the area, unlike the previous image that was driven by the business ideologies behind it to expand and develop the resources in the area. Snyder comments that Ansel Adams found some of O’Sullivan’s images and described them as “technically deficient, even by the standards of the time, but nonetheless, surrealistic and disturbing” (Snyder, 2002, p192) which led to O’Sullivan being entered into the modernist history of photography where he has remained ever since.