The photograph as contemporary art by Charlotte Cotton

This book is one of the books listed in the reading list for the Art of Photography course material, it was also the first book that Sharon Boothroyd my tutor recommended I read, she told me it was very important in understanding the OCA view of photography as an art form and was close to the heart of the OCA values.

interestingly when I got my course materials the first thing I did was buy all of the books on the reading list from amazon and promptly received a huge box with a heavy warning on the side. I took all the books out having a skim of all the titles and a flip through some of the contents. I quickly divided the books into two categories, the interesting more technical books that told you where to point the camera and how to set your lights etc, and the dryer books that looked like a lot of text that beat on about the more “arty” side of photography and how important it was to sit for six years on top of some snowy Tibetan mountain and contemplate the sunset before taking an image with depth and feeling. Ye I admit it I started out with my engineers hat on rather skeptical about some of the things people call art!

This book was placed in the second pile and my insides did a tiny groan when Sharon said this was important. Now don’t get me wrong here I do in fact love art and I do have a very open mind, so I decided that as this was on the red list I should at least read it.

There was the first problem I started carrying it everywhere, every time I tried to read it I would get all sleepy (mostly because I was working too long and not sleeping enough). This is my first comment on the book itself, it’s not a casual read, you have to decide to read it and set yourself up to take it on board, the first few times I sat down with this book I read several pages and could not tell you what I had read. This is not a reflection on Ms Cotton but a reflection on me, I guess I was still adjusting to degree level study, and to learn one needs to be focused in a different way to the that you would employ to read the latest Dan Brown.

So with my head in gear, I took the book on the aeroplane with me for my flight to Cincinnati for work. I am now a convert I really enjoyed the book, firstly let me say that the language is not in common english, you will need a higher level of vocabulary to really get to grips with this book some may even need to be able to look up the more challenging phrases. Luckily I did not have this problem and although the language is hard going the results are worth it.

I made a very important bit of self-awareness while reading this book, if you look up the reviews of other people about this book the language is a common criticism although it irrelevant to the actual underling message that the critics should be reading, the main criticism that we should be talking about reflects my earlier comment about the arty side of photography. This is the heart of the book for me and I discovered that there were images I loved in the book and some I hated (More on this later) but what I think was my most important discovery was that it doesn’t matter if you love or hate an image it matters that you have an opinion, and this book is key to helping you develop an opinion. If it provokes anger in you well and good that means you have a view as does loving the book to bits.

that shows two semi naked people a man and a woman with the man injecting a drug into the womans arm, now I have no problem with nudity, I have always admired the Vogue photographer Helmut Newton for his very stark and hard-hitting images of the erotic, I was given a book of his images when I was a teenager into photography and he has always been one of the photographers whose work I recognise on site. the image in question [134] stirs some things in me that make me very uncomfortable, it conjures images of poverty and the ruin of life and lifestyle, this is probably made worse for me as a father of two young girls and the horror of them falling into the lifestyle this image creates for me. I am sure others will love this picture for its hard-hitting photo journalism it’s just not for me.

I found myself thinking about how I may interpret some of the photographic styles in the book and the idea of recreating tableau’s of famous stories or events really appeals to me, I read a review on the book that commented that they just did not get dead pan, I however am really excited by this and need to look closely into what it really means as there are several things that I think might work here, I love the image of the muslim girl at the start of the deadpan section [75] Celine van Balen, Muazez, 1988 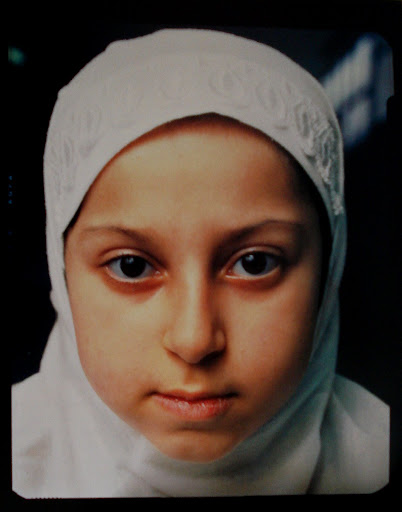 which reminds me of the much stronger and iconic photo taken by the National Geographic photographer Steve McCurry of the Afghan Girl, which is so powerful and did so much on a world stage to help the plight of the Afghan people. There is incidentally a really brilliant National Geographic film on that picture and the journey Steve and his team made to find that girl again some years later and re take her image, it’s really worth watching.

Back to the book, my problem with the book is that it rushes through so many photographers so quickly and usually only displays one image where you really need to see the series to understand the context of the image. The images are also too small for my liking, with my now less than perfect eyes (needing reading glasses now) it was sometimes difficult to get the proper perspective of the image. For instance Page 42 image [36] David Spero, Lafayette Street, New york, 2003,

I suspect that there is a very cleaver visual trick in this image in which the coloured balls appear to form a plane through the image and may in fact seem to hover based on their size and placement, but the image is so small I can’t quite work that out from the image, I looked it up on the web to see if my theory was correct and as yet have been unable to find a bigger representation of the image to verify this it is on some photography blogs but it is alway small.

This is a photograph of a sculpture submitted by Marcel Duchamp to the Armory Show in New York, where it is claimed that all he did was rotate the Porcelain and sign it R Mutt, there was apparently a hue and cry over this entry as people were appalled that this should be called art!. its interesting isn’t it that this sort of controversy still rages today take the exhibit by artist Tracy Emin the un made bed.

The thing that strikes me is that the original sculpture is often criticized for not being art and yet as photographers these are te sort of thing that we take images of and do indeed seem to be art. Is this because the public expect sculptors to do more for their living than turn a urinal on its side and if so do they assume that taking a photo of a urinal on its side is a more difficult process that requires more setting up of the camera processing etc, that maybe the photograph earned its place on the paper where the sculptor didn’t. I think that the art comes from the concept and the idea and its reflection of a message so the bed and the urinal earn their place too. I am sure Tracy Emin isn’t concerned as it one of the more famous modern sculptures . In the end it made people think.

The end result of my reading this book is that it has me thinking, it was really worth the read and I think it has defused my mildly hostile attitude to the “Arty” stuff which I think I understand better now and it has placed me firmly on a road to find my voice in photography. It has also led me ton understand that is ok to not like some of the things others rave over, that’s all part of who I am and the voice I am trying to develop through this degree. I now understand why this book is core to the OCA way of thinking.