I had a bit of a moment studying Erwitt, when I came across this: 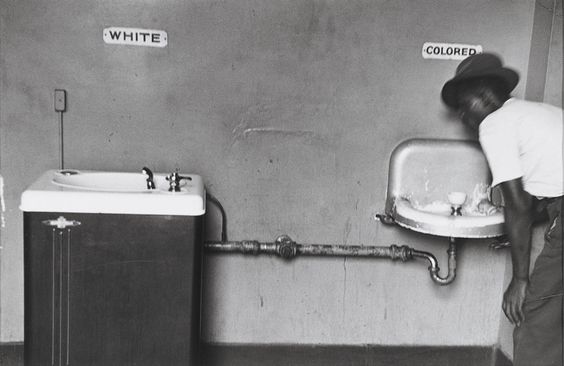 I have heard many stories of the segregation of Blacks and Whites, I grew up i an era that was inherently racist, I found myself having to throw off the indoctrinated ideas I was fed as a child, especially as I made good friends with people of all races. I think of myself as someone who has risen above those nasty ideas. Seeing this image shocked me in a way none of the dogma and stories ever did. I look at this image and am staggered that someone went to all the trouble of installing a second sink of a marked lower quality so that White and Colored would not use the same sink. When I contemplate this the only reason for doing this is to insult and degrade people of colour, I find it utterly distasteful, however I find the image has had such a marked effect on me that I cannot say anything bad about it, if an image can have an effect on someone like this it must have hit the spot.

Its strange because the image is not technically that great its not straight and in terms of composition cuts off most of the chap using the sink. However it has a punch that hits well above its weight technically. It brings to me the writing of Bathes who could not understand why everyone else was not getting excited by the picture of Napoleons brother, who’s eyes had gazed on the emperor. This is for me a strong pointer towards the meaning of a punctum.

Some images teach you far more than they would first appear to be able to, this strange simple shot is now one of my favorite as an explanation of what makes you like an image, in this image if you have never been told about the Black white segregation the image may just confuse or leave you wondering what its been taken for.